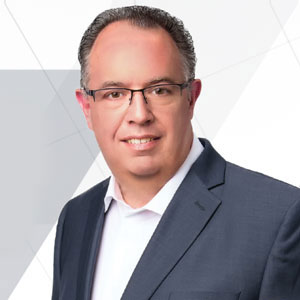 Paul Vinciguerra, CEO Vinci Consulting Corporation CEO Paul Vinciguerra is a straight shooter, and it trickles down to every aspect of how he runs his company. From the way they engage with customers to the way they approach their space, making an easy sale is secondary to a straightforward and honest critique, and that’s what makes Vinci so interesting. While other Cisco resellers create designs with an end-goal of selling their clients more hardware, Vinciguerra will directly tell his clients that what they want to do, most likely won’t work, if that’s the case. And it’s this kind of candor that gives his team a clear overview of everything that goes on in their space, whether it involves overworked system administrators or questionable sales tactics employed by other resellers.

“The reason I started this business wasn’t really to help anyone but myself, to be honest with you. I just wanted flexibility to spend time with my son,” explains Vinciguerra, on a different note. Surprisingly, flexibility is an issue in the networking space as well. Many of the solutions are rigidly designed for use with monitoring tools that don’t fit the customer’s environment or the solution “locks them in,” which leaves little to no room for interoperability, and often trades short term project delivery gains at the expense of long-term delays. Vinci Consulting defies this trend by sometimes programming automation scripts for their clients and making their solutions interoperable. They’ve even gone as far as redesigning their customers’ networks to use standards-based protocols rather than Cisco’s EIGRP that “just works” so that they could add on any third party components they wanted.

"our ability to deliver comes from really understanding high-availability, it’s limitations,what has been implemented and what is working on someone’s network"

“For us building highly resilient campus LANs, (which today people are calling the underlay) is the basis for everything. What we’ve done for customers is to we build them a strong underlay and move on to building up their data centers and then distributed data centers for them,” expounds Vinciguerra. This is a big differentiator for them. While other Cisco partners might head to Cisco’s website and rely on their old tried and true methods, Vinci Consulting is actively engineering and relies on the expertise of their Cisco CCIE certified engineers to deliver their solutions with a unique level of engagement. They can go to CIOs and explain what’s needed, or they can get in, roll up their sleeves, and get started on a project with other engineers while showing them how to get things done. That allows them to create more resilient projects and confront problems early in a project before their customers have to.

But what happens if somebody goes ‘oh yeah, I can just extend this’ and doesn’t actually think of what’s happening behind the scenes? Unexpected failures arise when all the failure scenarios have not been considered in advance,” adds Vinciguerra. It was in stretching one of their customers’ data centers that Vinci created a network overlay that would allow them to address some unique problems.

“The key to distributed data centers these days are network overlays, and the network overlay is only as good as the underlay that it’s built on,” continues Vinciguerra. In this case, Vinci Consulting’s VXNet had an interesting set of prerequisites to meet. When one of Vinci’s customers tapped the networking consulting thinktank for a disaster recovery solution, they realized that one of their customers had an external IP address that was hard-coded into a system, meaning they were unable to change it and DNS based solutions were out. As a result, Vinci introduced VXNet, an overlay ISP that could move an IP address from one data center to any other location across the world without changing the other hosts in the local subnet. This eliminated the need for BGP GRE tunnels for the multi-homing and ingress traffic management of customer edge networks.

“People want to talk about SD-WAN, well this is what we’ve been doing for the last five years, and our SD-WAN solution works with just about every Cisco router out there.” says Vinciguerra. VXNet was developed before the much talked about SD-WAN and Cisco IWAN. With VXNet, Vinci could deliver IPv6 over IPv4 in places where the former wasn’t available, and simplify disaster recovery and moving workloads to and from the cloud substantially. It can enable a customer to run on rented backup systems, cold systems, warm systems and virtually anything that the user might want.

Perhaps most interestingly, the overlay solution isn’t one that runs in a data center. It runs across the Internet, the most challenging underlay network of them all. They offer an array of other high availability solutions for customer’s Internet edges, such as traffic engineering and load-balancing with VXNet, which eliminates the need for clients to invest in expensive circuits that run BGP.

The ingenuity of VXNet extends beyond what it can do and into the territory of the trends it takes advantage of.

Automation, Efficiency, and what it Means Going Forward

As far as their efficiencies are concerned, Vinci Consulting is top notch. They build highly available networks with standards that are between four and five nines in availability on their network components. “We’ve done live core network redesigns in hospitals while healthcare providers are relying on telemetry information running over the network and our ability to deliver comes from really understanding high-availability, it’s limitations, what has been implemented and what is working on someone’s network before you start touching it,” continues Vinciguerra.
“The datacenter world is moving from automating the creation of the virtual machine to automating the creation of containers and in doing so, customers start seeing all the value of data center recovery and things along those lines,” comments Vinciguerra. Image-based (think virtual machine) data centers are quickly becoming a predecessor to containers, mostly because of the fact that the former copy the same operating system files over and over again from one location to a disaster recovery location.

Vinci Consulting understands the value of things such as network and server automation and is automating the configuration of their VXNet solution through OpenStack. What is impressive is that entire datacenter will be able to be created or recreated from a single Ansible script.

“Infrastructure as a code is changing the way we work, where the configurations of the devices are being treated like software. Code is reviewed beforehand, it’s tested, just like all of the things that happen with software, and once it’s been approved, then in an automated way, it can be rolled out in a production environment.” elaborates Vinciguerra. In the CEO’s opinion, Cisco doesn’t have an apt solution that follows this trend. Opposing points of views like these are the reason that Vinci built their own APIs. Cisco’s REST API relies on users to submit all of their changes, what is on the device as well as the new additions, at once to an interface, whereas Vinci’s allowed engineers to submit the changes incrementally, as per how engineers usually work.

The Future of Vinci Consulting and VXNet

In its five years of production, Vinci’s VXNet has garnered some serious attention. The consulting group has been invited to make their own presentation at Cisco Live as well as to the ISP community at NANOG, the North American Network Operator’s Group. What’s next is for the company and their big solution is making it available to anyone. In 2017, Vinci Consulting will be rolling out a fully automated customer portal where anyone can enroll on their own as well as provision and de-provision services at will. Whether it’s a smaller office or a whole company, users should be able to have the solution up and running in under an hour. It will run on top of the company’s OpenStack cloud. In addition to that, the integration of VXNet with OpenStack gives users access to the hybrid cloud, as well as extensions of the public and private cloud. Vinciguerra warns users, however, that users need to understand what they’re getting with the offering. “One of the problems with any hybrid cloud is that we still can’t change the characteristics in the speed of light. When you’re sharing something between a public and the private cloud at various geographic distances, there are going to be latencies that impact the solutions,” explains the CEO. Still, it provides a crystal clear road map for the honest provider, who continues to remain close to all of the changes transpiring within their space.

As for new CIOs coming into the network space, Vinciguerra’s advice is simple: “If you want to be in it for the long term and you want to do right by your customers then you need to really learn the underlying protocols and the rules that their networks are governed by.” With businesses disappearing as quickly as they appear, Vinci Consulting is proof that being knowledgeable and having an open, honest policy is not only ethical, but ultimately beneficial to any serious, growing business. 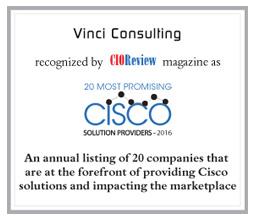 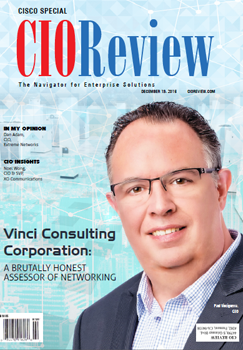